Under the Cover: Shinoy and the Chaos Crew 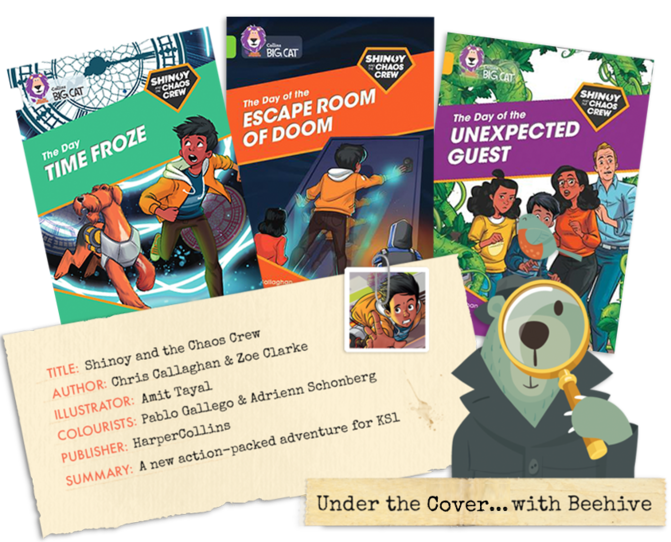 In this series, we'll be taking a deeper look at the illustration process behind some of our favourite recent titles, and speaking to the creators involved. This time, we'll be diving into the world of Shinoy and the Chaos Crew, a new 24-book adventure series for Key Stage 1, published by Collins Big Cat.

We'll be hearing from our very own Beehive artists with a behind-the-scenes look at the illustration process, but to kick off, editor Holly Woolnough and author Chris Callaghan tell us a bit more about the genesis of the series. So...how did it all start?

Holly (editor): We wanted to commission a new series of books for our Big Cat list, as that's the preferred way of reading for some children. They get hooked on particular characters and worlds, and tear through book after book, developing their reading. We had lots of submissions, and Shinoy and the Chaos Crew just jumped out at us. It was fun and exciting and we loved the central character, Shinoy. We drew up a short list and asked lots of teachers and children and they all picked it out too! We were really keen to entice reluctant readers and with the great characters, action-packed plots and humour, we thought these would be the books to engage them, and convince them that reading is for them too.

Chris (author): I was pondering about what stories I would have enjoyed when I was younger. I watched far more TV than read books, so wondered if I could combine the two. I would have loved for my favourite TV characters to come and visit me and then we'd have lots of crazy adventures together. The idea of an app with a glitch, where Shinoy could summon his TV heroes, seemed like a good way to link both worlds and have lots of fun and adventure. 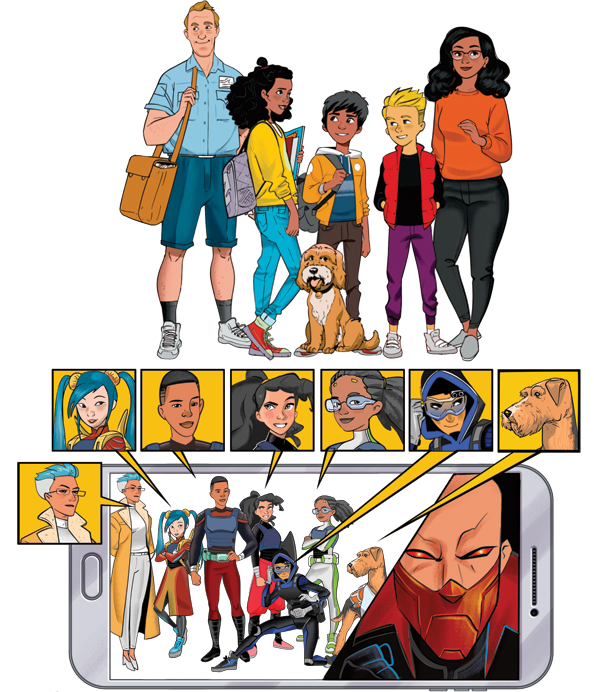 The main character lineup for the series

Holly: As the in house editor for the series, I'm involved from the beginning, working on story ideas with the author, right up to preparing the books to go to the printers. I worked with Chris to develop his ideas and create the final manuscript, worked with the illustration team to create rough artworks and then final illustrations, alongside a number of freelancers including typesetters, copyeditors and proof-readers to make sure that everything gets done on time. It's a real pleasure seeing the entire process through from start to finish.

Chris: Trying to come up with so many different stories was very challenging. There are 24 fiction books and 12 graphic novels (and 12 non-fiction books too!), so making sure each one was completely unique was quite a task! Luckily, I had help from a wonderful writer (and editor), Zoë Clarke, who wrote 7 of the books adding her own fabulous ideas into them. Zoë and the whole team were a huge help with creative and crazy suggestions.

When it came to the illustration, Beehive super-agent, Ellie, assembled a crack team of artists to bring the action-filled stories to life! With so much content to produce, it was vital to work as a team to keep everything on schedule. With Amit Tayal taking the helm as the lead line artist and character designer, experienced illustrators Pablo Gallego and Adrienn Schonberg also came on board as colourists. Amit gives us an insight into his process for a project like this:

Amit (lead artist): First, I like to draw very rough composition and once all the panels/illustrations seem fluid I refine the characters and background in the inking process. Then editing team looks closely at all the sketches and provide their feedback wherever required. After that I finalise the stories with colouring by color blocking the compositions and then finally refine the illustration with the brush strokes of highlights and shadows.

Before launching into the stories, Amit's first task was to design a cast of fun, relatable characters to embark upon a whole host of adventures. With Shinoy as the focus of each story, he had to be a character which reluctant readers could engage with: an intelligent hero, balancing his familiar home life with a comic-book world where seemingly anything can happen. Amit's initial designs for Shinoy, a ten-year-old mixed heritage schoolboy, immediately captured the essence of what the authors had imagined. 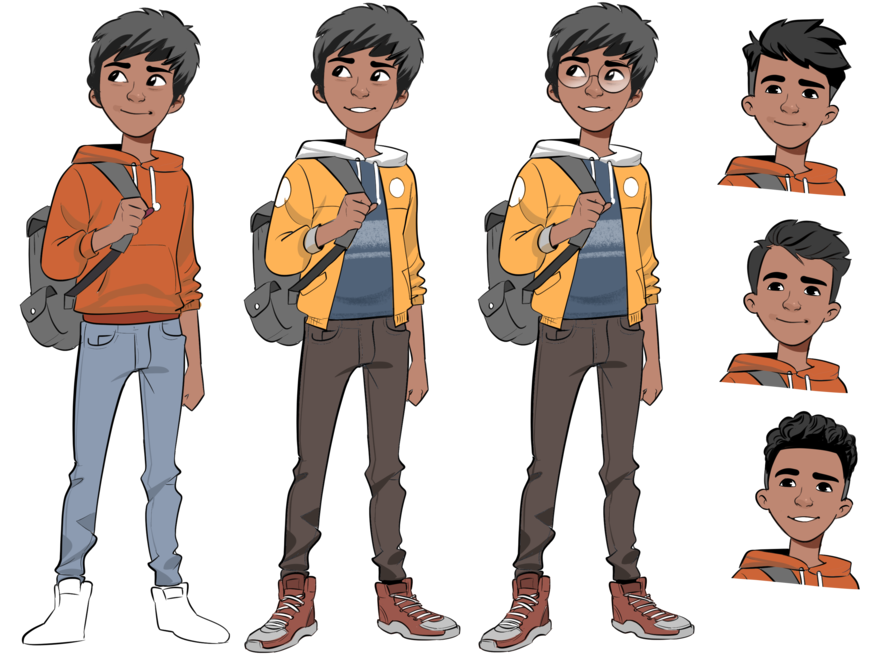 Amit: I like to draw many rough variations at the early stage of character development. It gives me more control over what is working and what is not. It really helped in building the characters. Also, character briefs were very crisp which made it much easier to imagine the characters. So from first rough to final version it was all a smooth process. I really enjoyed drawing and developing the all the characters, so I can't think of any particular character that was challenging to draw. But perhaps it took a little more time to solidify Mustang Harry and Shinoy's Dad.

Holly: One thing that stood out was that right from the beginning, Shinoy was perfect. While there were some tweaks to some characters, we haven't changed anything about Shinoy from Amit's first sketch. There was a cheekiness and an energy about Shinoy, and we knew straight away that we wanted Shinoy to look exactly like that.

Chris: Amit has created characters much better than I imagined. I gave him an idea of what I was thinking, but he made them far more dynamic and much more real than I could have hoped for. I learned very early to trust Amit and knew he would create such fabulous looking characters.

Holly: We worked with Amit's initial ideas on the other characters to develop them into a cohesive team that would appeal to the
age range. From the beginning, we were keen to let Amit take an initial steer on the characters, to see what he came up with, without a detailed brief. It was always really interesting to see what he came up with, which was sometimes totally different to what we'd imagined, but worked brilliantly. Looking through the various development stages, it's nice to see how the characters became fully-formed, while keeping the initial spark that led us to choose Amit to illustrate the series.

With such a strong cast of characters embarking upon so many zany adventures, it's pretty hard to pick favourites, but we've asked the creators to come up with the stories and characters they've most enjoyed bringing to the page.

Pablo (colourist): Without a doubt, my favorite character was Shinoy. Because he appears in all the stories and I have come to love this character very much for all the situations and adventures that he lived throughout the entire series. An excellent character. Brilliant work from Amit, no doubt!

Adrienn (colourist): For characters, firstly Shinoy - I really like his design, you can really see his kind and always ready to help character. My next favourite one is Myra, because I really loved her expressions in the books, mainly when she had sarcastic lines. The Day of the Haunted House was my favourite book, because I really love the atmosphere and the illustrations in that book. It was one of the most challenging ones with the old house for me, but I am so happy with how it turned out! 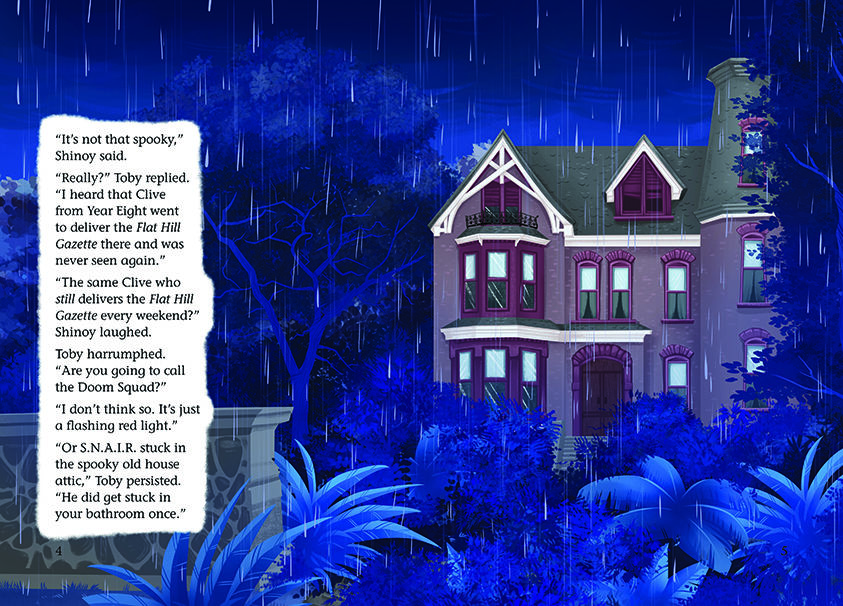 The Day of the Haunted House (Amit Tayal and Adrienn Schönberg)

Chris: I suppose that Shinoy himself is my favourite. Amit Tayal captured his cheeky and adventurous nature perfectly. But I also have a soft spot for the nasty S.N.A.I.R. – he looks so evil!! I particularly love all the agroweed that grows throughout The Day of the Unexpected Guest. Amit made this look so alive and spread out across the pages. 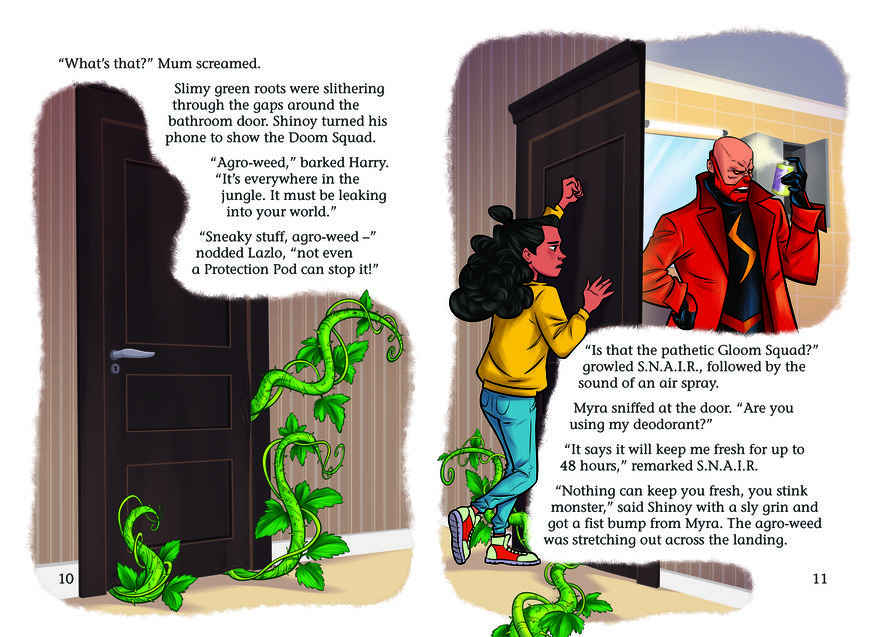 Amit: My favourite character to draw was Salama! I love her kick-ass attitude and the way she is always ready for action. Though, she is differently abled but this doesn't stop her from saving the day. In terms of books, Creepy Castle is full of suspense, exciting and it has equally funny climax. I totally loved drawing it. 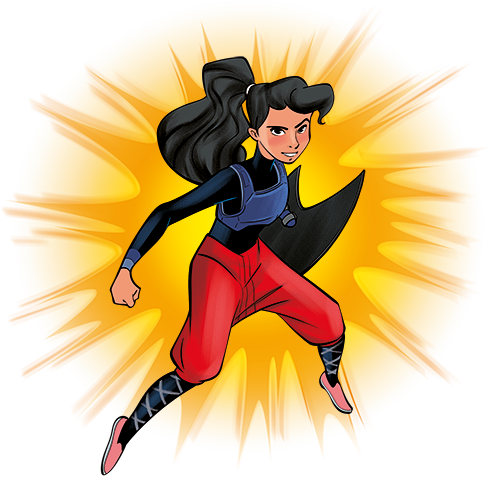 Holly: I'm a big dog fan, so I've always had a soft spot for Mustang Harry. It's been so fun to see Chris write so much personality into the character, and then to see all of the different outfits that Amit has given him for the different locations and adventures that the Crew take part in. 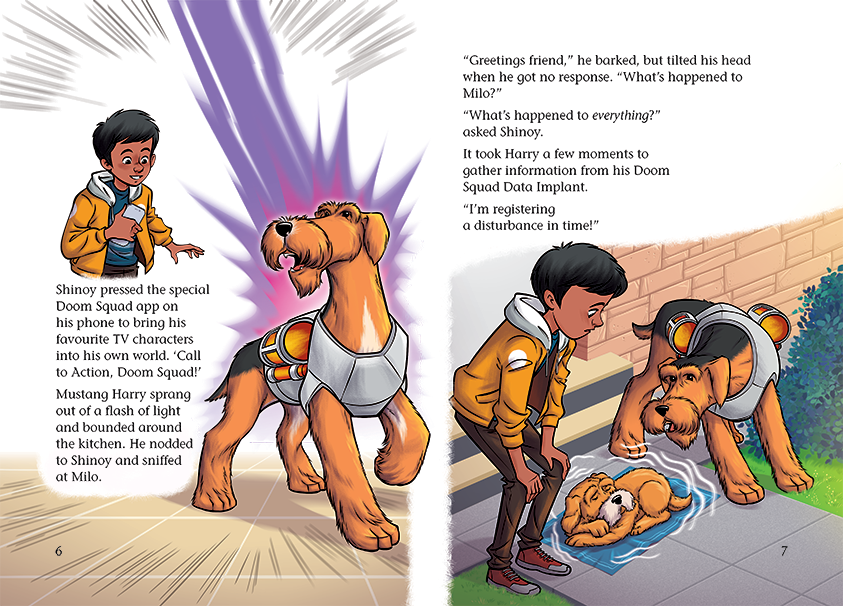 Mustang Harry is called on to investigate a glitch in time

Chris: I think The Day of the Risky Rescue was a lot of fun to write, and it was the last story of the fiction books that I wrote. I like how Shinoy gets to go into the world of the Chaos Crew with his Dad. It was a good way to end the series. But there are a couple of the graphic novels that I really like too, like Mission: Mega Meteorite! Oh, it's soooo hard to choose!!

We quite agree! We're so proud of all the hard work our team of illustrators have put in to the series, creating such a dynamic set of books - and we hope they'll encourage those readers that need a bit of extra encouragement to really get 'stuck in' to a book. So, any final thoughts?

Holly: I love the energy that Amit's illustration has brought to the books. He's also perfectly matched the sense of humour that Chris gives to the text, so they've been a perfect match. There's so much action in every page of Amit's illustrations, and it's brilliant that after 36 illustrated books, there's something different and exciting about each of them.

Chris: There is so much to love with all the illustrations. Amit has created page after page of dynamic and dramatic action, full of movement and excitement. But it is the expressions on the characters' faces that I really love. Whether it is shock, anxiety, confusion or humour, Amit always does this with style. It has been a real treat seeing the illustrations bringing these stories very much to life.


You can find out more about the whole Shinoy series here at the Collins website! And remember to join us next time when we go 'under the cover'... 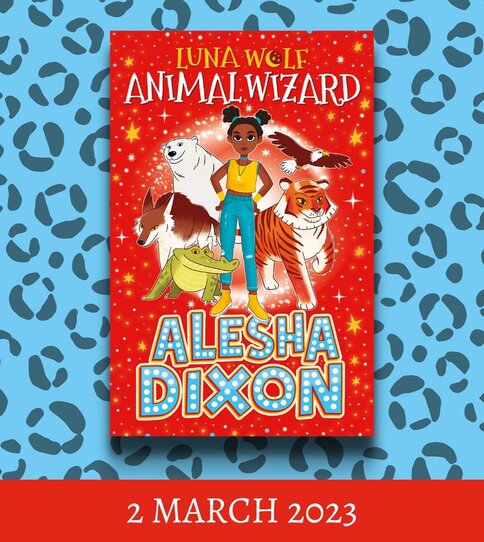 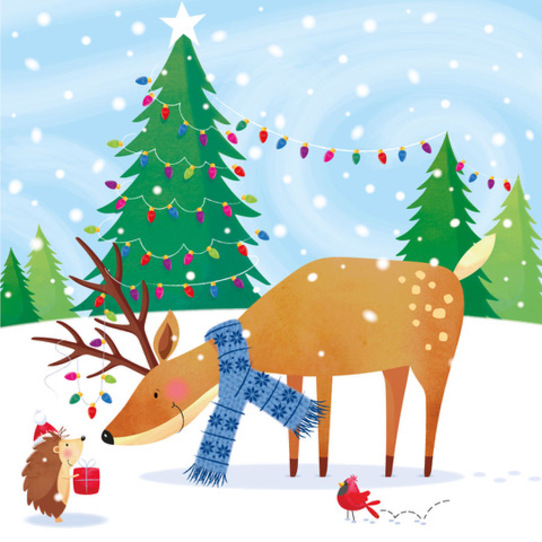 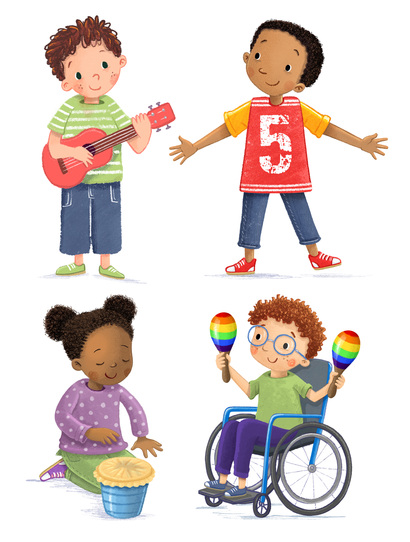